his early South African period until 1968

works exhibited in London in 1975 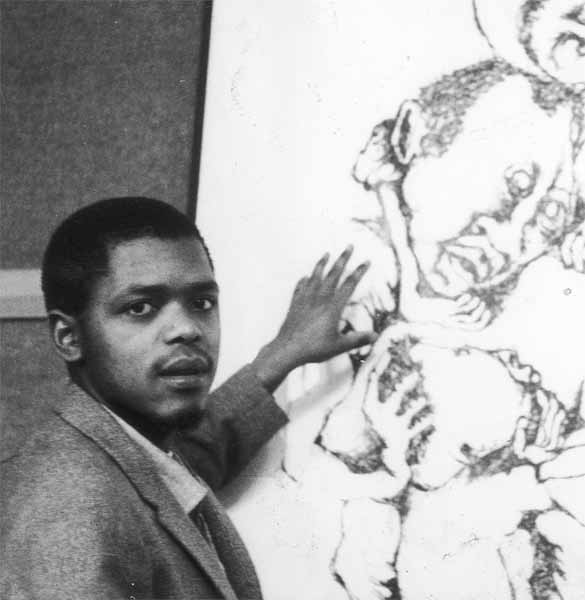 DUMILE explaining one of his larger drawings at the Durban Art Gallery, 1966 (© A. Moosa Badsha)

The reputation of many great artists, both international and South African, is often based on their early works which impacted on the viewers. This definitely can be said of Mslaba DUMILE-Feni (DUMILE for short as he then called himself) whose early and large works were of everlasting power, causing a furore on the South African art scene.

Unfortunately, when DUMILE left for Europe and the USA, he also left behind him all the input of life that had surrounded him in South Africa - his drawings became stylised, often without much impact, even whimsical or contrived - this is exemplified by comparing the larger drawings of his South African period with the works produced in London and shown at Gallery 21 London in February, 1975.

DUMILE can ONLY be considered great with the best of his drawings from 1965 to 1968.

DUMILE as seen by the SA press

(you may need the free Adobe Reader to view the PDF files!)

As there are so many versions about DUMILE's background - even his exact birthplace and year DUMILE did not know - we have decided to reproduce various articles and interviews held from 1966 to 1968 which we have in our archives - comparative and analytical reading will make this statement clear!

Further information available from your library or from our office, on request!

DUMILE in "Isaac Witkin: The South African Mozart of Bronze" by Dr Amitabh Mitra (an extract)

If you have additional information or images on DUMILE from his Johannesburg days, please let us know so that we can update this page!