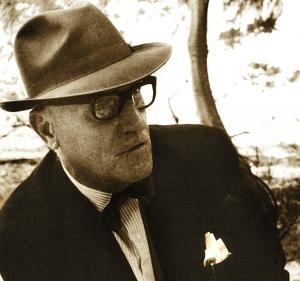 Malcolm de Chazal (12th September 1902 to 1st October 1981) was a Mauritian writer, painter and visionary, known especially for his Sens-Plastique, a work consisting of several thousand aphorisms and pensées.

He was born in Vacoas of a French family long established in Mauritius and wrote all his works in French. Except for six years at the Louisiana State University, where he received an engineering degree, he spent most of his time in Mauritius where he worked as an agronomist on sugar plantations and later for the Office of Telecommunications.

In 1940 he began to publish in Mauritius a series of volumes consisting of hundreds of numbered thoughts and ideas entitled Pensées. In 1945, a seventh volume of Pensées, bound with another collection of unnumbered aphorisms entitled Sens-Plastique appeared, and two years later a separate Sens-Plastique, Volume II, appeared. It was this latter volume on which the Gallimard edition of 1948 was based that brought Malcolm de Chazal into prominence in France. He was hailed as a surrealist by André Breton. …

Malcolm de Chazal took up painting in the 1950s at the suggestion of Georges Braque. Unlike the speculative aphoristic character of his best-known writings, his paintings concentrated on natural forms and landscapes in a primitive, emblematic style. 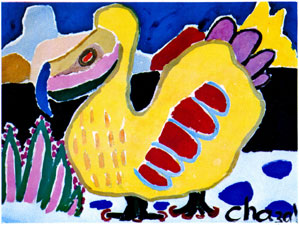 This exhibition was enabled through Malcolm de Chazal’s one brother Charles de Chazal who lived at that time in Johannesburg, working at the GPO in Jeppe Street and living nearby in a small apartment. 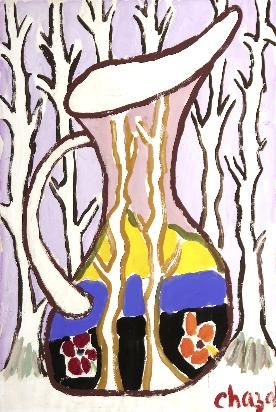 Many works illustrated on the web

Please click on image for better view of some of the gouaches sold by Galerie Michel Fillion, Antibes