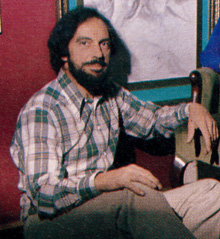 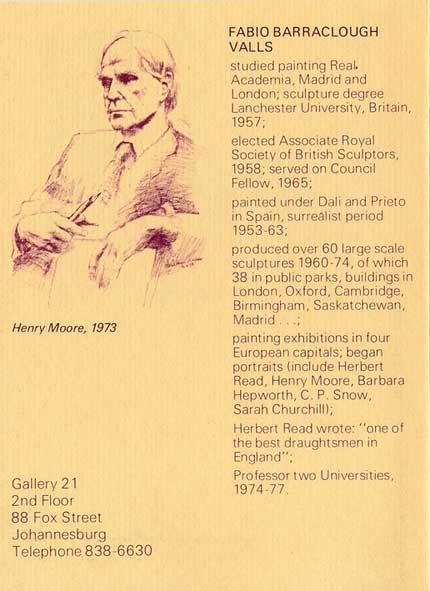 Volunteered for the British Royal Navy, trained in the Royal Navy's Special Division: Naval Intelligence in 1942, serving actively from 1943 to 1946, in Reserve until 1956.

In 1974, Prof. Fabio Barraclough was a member of the three-man judging panel for the Southern Cross Stainless Steel competition for the Transvaal House, Pretoria (won by Zoltan Borbereki) (the other members being James Fitzsimmons, Editor of Art International and Don Maxwell (Southern Cross).

In 1974, Prof. Fabio Barraclough was one of the 5 judges for a Mural Competition launched by Nestlé SA, Johannesburg.

As at August, 1975, Prof. Fabio Barraclough was Hon. Director of the Gertrude Posel Gallery, Director of Exhibitions, at the University of the Witwatersrand, Johannesburg.

He is also referred to as "Edmund Geoffrey Fabio Barraclough"; his paintings/graphics/drawings back to his surrealist period were signed "F.y Valls" or "y VALLS"

Images from the Coventry Cathedral "Exhibition of British Sculpture", June/August, 1968 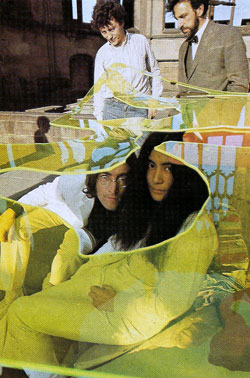 Fabio Barraclough (top right) and Anthony Benjamin behind his perspex sculpture, John Lennon and Yoko Ono inside it (pic. taken by Anthony Fawcett), (as illustrated in Sculpture International Vol. 3 no. 2/3, Summer 1970, p. 36) of which Fabio Barraclough was its Editor and joint publisher with Pergamon Press. 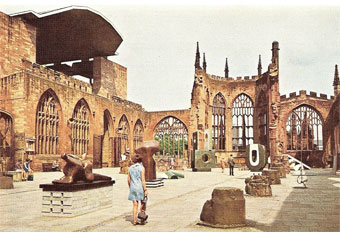 Coventry Cathedral in June/August, 1968: "Exhibition of British Sculpture" - view of some major sculptures.

"In the mid 1960s sculpture achieved a temporary ascendancy over painting and this fact was confirmed by the emergence of "Sculpture International". Its editor, Fabio Barraclough, claimed in the first issue that art had entered the 'Age of sculpture'......."

As then Editor of "The Annual Review" of The Royal Society of British Sculptors", Fabio Barraclough was a delegate to the Fifth International Congress of Aesthetics in Amsterdam (August, 1964); later he founded "Sculpture International" and was its Editor until 1975.

Web references to his teaching activities in the U.K. and South Africa 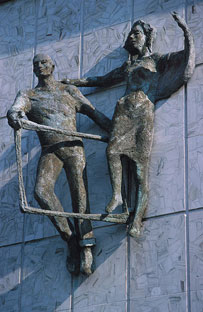 (Two figures protruding from the side wall of the gallery; holding an empty picture frame) commissioned after a public competition in 1963-64) 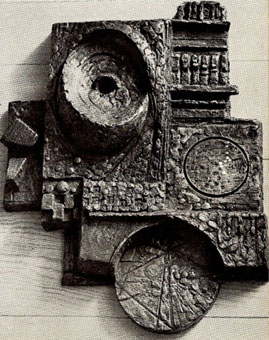 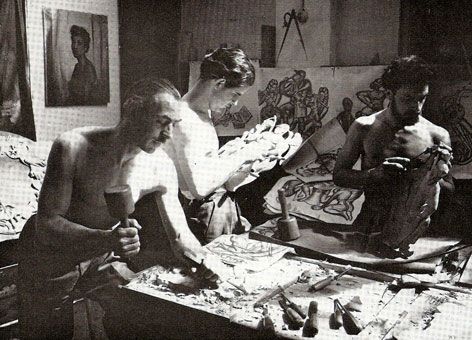 Another collaboration with Edward Bainbridge Copnall was working on parts of Copnall's huge "Stag", together with Bernard Ball.

Web references mainly to the artist's later political background of which Gallery 21 was not aware at the time!

Acknowledgment: Lidchi 1977 card per archives of the Johannesburg Art Gallery

Fabio Barraclough was one of 5 judges in the Golden Rugantino Award in Johannesburg in October, 1974, together with Michael Coulson, Nils Burwitz, George Boys and Natalie Knight

Please click on image for details and better view!